Our recent write up in the Independent!!

They say you never forget how to ride a bike, but this 32-year-old writer never learnt in the first place. Here's what happened when she finally saddled up

Reactions rarely differ when you tell people that you can't ride a bike. Invariably they express disbelief, followed by shock and superseded by astonishment.

Sometimes they run a few cursory double-checks. You mean a pushbike? Yes. And what age are you? 32. And you never learnt? No...

I never made a conscious decision not to ride a bike when I was a child. I didn't duck out of lessons or develop a fear of wheels.

When my friends went cycling en masse, I simply jumped on the back of one of their bikes - a backer is the only way to travel when you're a teenager out looking for trouble.

I'm fact, I never even tried to ride a bike.. well, save for the Beijing incident.

I was invited to attend a conference in the Chinese capital during my mid-20s and I made full use of the amenities that the first-class airfare offered.

When we arrived at the hotel, the conference organiser "surprised" us with a line of bikes ready for us to tour the city with.

"Could I have a word?" I asked her with as much tact as someone who has been drinking red wine for 10 hours straight can muster.

"I can't ride a bike," I whispered when she joined me outside the room.

She was surprised, of course, but not as surprised as I was when the next line came firing out of my mouth: "But I'm going to learn today!"

I don't know if Katie Melua was correct when she said that there were nine million bicycles in Beijing, but there are definitely quite a lot of them.

Much of my first cycling experience was spent dodging these bicycles, while also balancing myself against the sides of buses and trying to work out what the locals were screaming at me - no doubt some variation of 'get off the f***ing road!'

After that trip I decided that cycling just wasn't for me, but seven years later I was forced to backpedal on that decision.

I bought a ticket for Burning Man in Nevada and later found out that a bike is crucial to traverse the sprawling desert landscape. My other option was a segway.

Friends and family offered to teach me. My four-year-old nephew was particularly considerate. "Look! You just do this!" he said, before cruising around me in yet another perfect circle.

They were all well-intentioned, but when you need something done fast, it's best to call in the professionals.

I emailed the Irish Centre for Cycling and they replied a couple of minutes later. "We expect we will accomplish this within your desired timeframe of a week," read the email.

A couple of days later I was shaking hands with instructor Patrick Cherry at the centre's headquarters in Malahide Castle, Dublin.

Patrick was curious about my hobbies and he gave a little air punch when I told him that I practiced yoga.

"This'll be easy," he assured me, "because you'll already have the balance."

He also told me that the success of a lesson is largely down to whether or not the student trusts the instructor.

I trusted Patrick at first sight - he has an eternal Boy Scout demeanour and comes across as the type of person that can wolf whistle and tie sailing knots. He even gave me a backer from the office to the carpark where the lessons take place.

We spent the first few minutes getting acquainted with the bike and practising balancing exercises. Patrick would tip the centre of gravity and I'd have to readjust my position accordingly.

"It's about showing people before they get on a bike that all is well with the equipment and the area you are using to cycle in," explained Patrick a few days later.

"The point is to show they have the ability to balance on a piece of equipment. You can see people start to believe in you when you get this right. When this exercise goes well, I know I can get them to cycle."

Next we learned how to push off and brake before progressing to assisted cycling, with Patrick holding the back of the bike and reminding me to stay focused on a point straight ahead. It might be an adult bike-riding class, but the technique is the same one taught to children the world over.

It was during one of these interim laps that I heard Patrick say "you're on your own now!" At long last I was riding a bike. And it felt pretty good.

After a number of high fives, fist bumps and every other congratulatory gesture, we moved on to the next lesson: changing direction. This came relatively easily. "Okay, you've got it," said Patrick, "so at this point it's important that you don't get cocky."

Two minutes later I got cocky and came crashing to the ground as I experimented with a sharp left turn.

Patrick took it personally. "That's the first time anyone has fallen off in a lesson with me," he said.

I assured him that it was entirely my fault for confusing the carpark of Malahide Castle with the Dakar Rally, but he was gutted.

However, he wasn't going to let a small setback get in the way of progress. "Where do you think you're going?" he asked, as I limped away from the scene. "Get back on that bike!"

Patrick's students have ranged from seven-year-olds to 60-year-olds. His current client list includes some middle-aged women, "a very nervous young lad" and a "teenage girl" for whom he'll be performing a risk assessment on a safe cycle route to her school.

Patrick told me that a lot of his female students become emotional when they finally learn how to ride a bike. At the time I thought it sounded a touch dramatic, but later, as I walked home, I began to feel strangely vulnerable too.

Maybe it was the fall, maybe it was the stress of pre-holiday prep or maybe learning to ride a bike is a developmental milestone that I had reached, almost 30 years too late.

Or maybe I had learnt at just the right time. A week later I was cycling through a dust storm in the desert, thinking about how fortunate I am to have left this particular life pleasure until last. 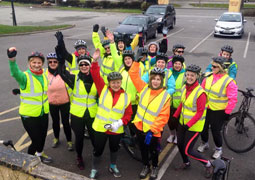 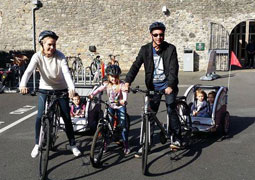 Where better to buy your bikes for Christmas... Buy off the bike experts at the Irish Read More

Check out this fun family day coming up!!      The Retail Park Liffey Valley is hosting another Read More

One to One Cycle lessons!!

Our recent write up in the Independent!!

Blood, sweat & gears: learning to ride a bike They say you never forget how to Read More

Keep up to date with our news  & special offers. Sign up to our newsletter: